Progress Report of the 2018 Commonwealth Ministerial Meeting of Small States

The Commonwealth Ministerial Meeting on Small States was convened in London, United Kingdom, on 17 April 2018 during the week of the Commonwealth Heads of Government Meeting (CHOGM). The meeting was co-chaired by the CHOGM hosts, the
Government of the United Kingdom and the Government of Fiji. In attendance were ministers from 41 Commonwealth countries, including all 31 small states, international financial institutions, regional organisations and several development partners who attended the meeting as observers.

This report has been prepared by the Commonwealth Secretariat and is intended to provide an update on progress against the key deliverables agreed by foreign ministers at their 2018 meeting on Commonwealth Small States. The report will be presented by Fiji on behalf of the outgoing 2018 CMMSS co-chairpersons at the upcoming 2022 CMMSS, with a view to keeping ministers informed of progress and to note deliverables and activities to be taken forward by the incoming co-chairs. 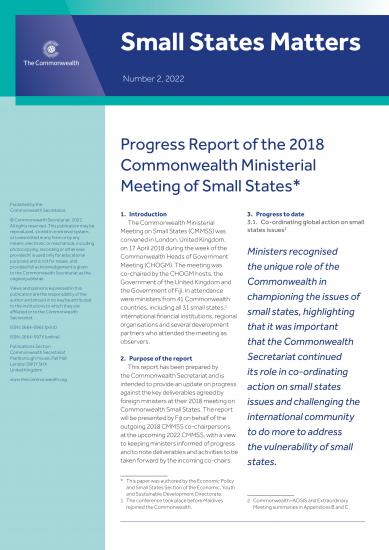