In most Commonwealth countries, national bibliographies are a very recent development. Hardly any pre-date 1960; many came into existence in the 1970s. They have tended, therefore, not to record a vast quantity of material that is of great historical, social and cultural significance.

It was to meet this need that the Secretariat, through this Division which administers the Commonwealth Book Development Programme, commissioned the IFLA International Office for Universal Bibliographic Control to prepare the present publication as a companion volume to Commonwealth National Bibliographies. The investigative and consultative processes undertaken by the IFLA International Office for UBC in fulfilling the assignment are described in the Introduction. Our thanks go to them, and to all who assisted them in compiling and checking the entries.

The resulting directory, Commonwealth Retrospective National Bibliographies, is intended to assist library authorities in Commonwealth countries in establishing the extent of bibliographic control of their publications before the advent of a current national bibliography. It will enable them to determine what needs to be done in the national context to complete the recording of such publications. Additionally, the work should serve as a prime source of reference for research workers, acquisition librarians and bibliographers who are seeking to identify gaps in existing bibliographic coverage, and where possible to fill them. In fulfilment of our conference mandates, it is offered as part of our efforts to assist the development of the book industry generally in member countries through the sharing of relevant skills and experience. 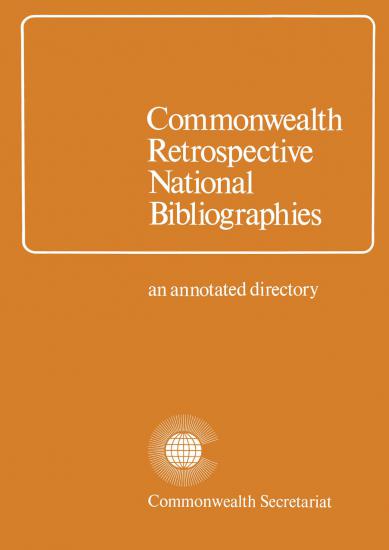