Sequencing the Implementation of Obligations in WTO Negotiations

This issue of Commonwealth Trade Hot Topics examines several aspects of the so-called ‘single undertaking’ principle of WTO negotiations subject to possible ‘early agreements’. The first section focuses on the nature of these ‘early agreements’ and the ways that they can be implemented and possibly used in later negotiations. The next section looks at sequencing the obligations of the parties as an alternative means to ensure internal balance within such an agreement. This is shown, for example, in Article 13 of the WTO Trade Facilitation Agreement, agreed in December 2013. The paper concludes with a consideration of the implications of these matters for developing countries in WTO negotiations. 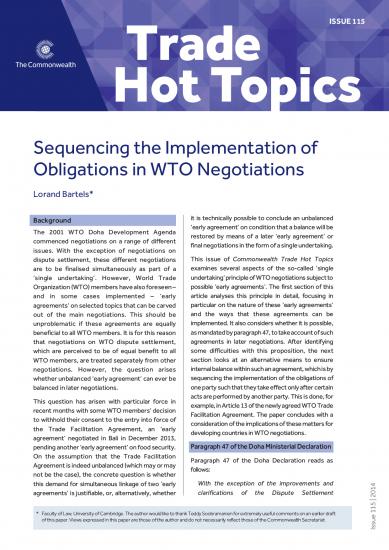