A Panel VARX Analysis of Debt and Natural Disasters in SIDS

This paper investigates whether there is statistical evidence to support a negative impact from natural disasters on Small Island Developing States' (SIDS') debt to GDP (gross domestic product) ratios. We study the difference between SIDS and non-SIDS in an effort to gauge whether size matters. This approach differs somewhat from the traditional literature, which focuses primarily on differences in development and educational attainment and institutional development when assessing the impact of disasters. Using a panel vector autoregression (PVARX) specification, our results suggest that debt to GDP ratios increase in SIDS following storms and floods and that, in contrast to recent findings, the changes in debt ratios are statistically significant. We also conclude that floods lead to faster debt accumulation than storms and that debt increases less in non-SIDS, mainly because of their stronger macro-economic fundamentals. The latter is observed when examining the significance of natural disaster intensity and the covariance between debt to GDP ratios, fiscal policy, growth and aid. Aid relief is found to play a significant mitigating role. 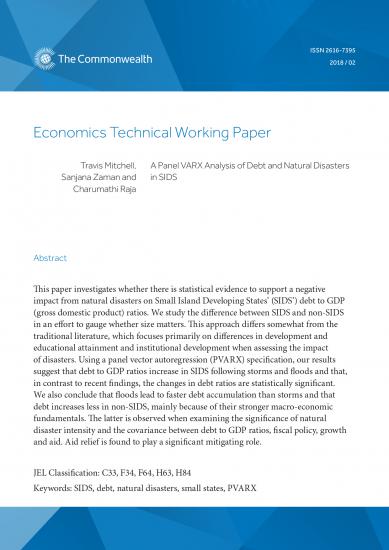